Kingwood was formed by Christians living in West Salem in 1940 out of a midweek prayer gathering.

What’s in a name? “Kingwood” represents our emphasis on the local community. “Bible” represents our commitment to hearing from God and sharing his word. And “Church” reminds us that we are the family of God.

Kingwood Bible Church was formed by a group of Salem residents who were members of the Dallas Oregon Mennonite Brethren Church. Several families began meeting in midweek prayer service in the West Salem home of one of the members in May 1940. That fall 27 signed a charter forming a new congregation calling it the West Salem Mennonite Brethren Church. In 1941 they built a new sanctuary at 1125 Elm Street. They also built a parsonage next door at 1111 Elm Street. 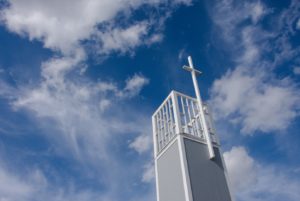 The first pastor was Abe Loewen who led the congregation from 1940 to 1946. In 1944, Rev. Loewen formed a Bible college named Salem Bible Institute. The original structure was expanded so the classes could meet at the church. In the fall of 1945, Salem Bible Institute was merged with the Beacon Bible School of Dallas to form Salem College and Academy (now Salem Academy). This new high school and junior college met in the facilities of the West Salem MB Church during the 1945-1947 academic years. In 1951 the church was renamed Kingwood Bible Church since it is located in the Kingwood District of West Salem and the emphasis on the Bible reflected the focus of the church.

Under the leadership of Leonard Vogt, pastor from 1960 to 1975, church growth made necessary the building of a new sanctuary in 1965. The new building was attached to the 1940 structure, which was converted to an educational wing. In 1970 a gymnasium/activity center was added. Over the years Kingwood Bible has hosted area events and helped new churches get their start in the area.

In 2018, Nathan Ensz became the pastor of Kingwood after God laid the people living in West Salem on his heart.
We continue to be affiliated with the US Conference of the Mennonite Brethren Churches (USMB).

For for more information, you can visit www.usmb.org and can find core beliefs at https://usmb.org/what-we-believe/